“What then shall we choose? Weight or lightness?” — Milan Kundera, The Unbearable Lightness of Being

Hello you fellow circlers. Here we are once again.

Have you heard the cicadas yet? They just started singing their circling high-sun song a few days ago here. To my ears, the sound is warm in its echo of other summers, but uneasy in its sonics. Cicada’s song enters the body and having nowhere to go vibrates in the teeth. Contrast that with the sound of honeybee, whose collective harmonics pass right through the body, eddying warmly in the muscles. The sound of a honeybee colony is nothing less than the hum of the great goddess. There can be no mystery why we are urged by men to fear the sound of bees.

And so:
This letter comes to you from a peninsula captured for a few hours each afternoon by that finely dissonant buzz of cicadas. Captured here at the height of summer’s arc, an arc that follows close behind that of the solstice, both like consecutive bends of a serpent swimming through clear water. At midwinter, when we expect to see the tail slip off into darkness, we are again confronted with the head, latched fast to the last bit of tail. The serpent is an eternal circle, you see, and each bend is at once new and very, very old; an image that recurs endlessly, but rises each time fresh from the clear water.

We are here once again.

Step out into the tall grass with me, let’s listen. The sounds that insects make with their legs and wings this time of year comprise a thin droning music that barely cuts through the whish of wind in the grass and trees. Theirs is the sound of wind dressed in a delicately barbed costume, or perhaps the sound of a finely toothed precipitate rising from among the rattling blades. Katydid the thinnest song of all, followed by cricket, then the dry rhythmic shake of grasshopper hovering over the bowed seed heads. Cicada cuts through it all, as discussed, but still thin as a single tenacious membrane. And then the sound of honeybee, which we feel in the entire body rather than just the space between the ears.

These sounds come and go throughout the day, just audible over the desperate rush of tires and the leaden roar of engines, and they last through just a few moons each summer. This sweet thin high-summer music is light as can be. 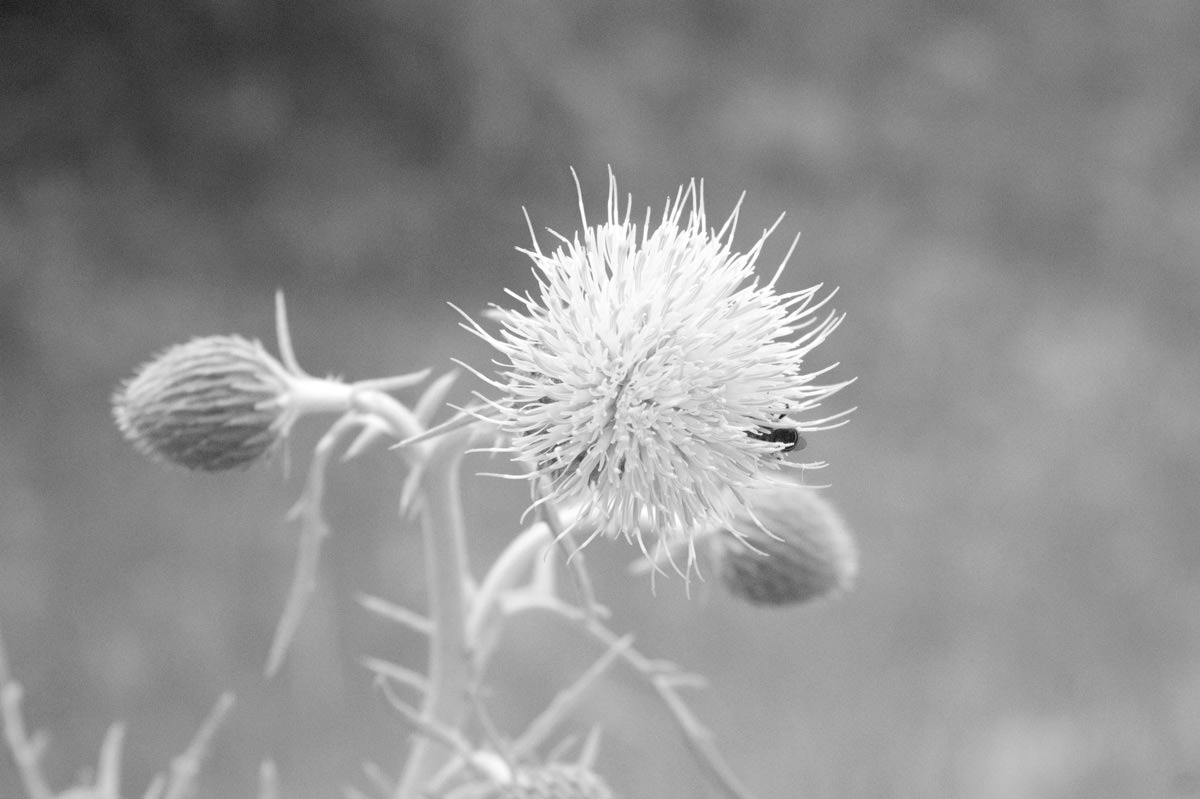 On hot afternoons, under the buzz of cicadas, the honeybee colony goes steadily about its deeply layered work. A bee departs along a thread that stretches off through the air and leads to a concentration of blooms, where she collects a few drops of nectar, packs some pollen around her legs, and in her perambulation makes fleeting asynchronous connection between pistil and stamen, a connection plants cannot make alone. The bee returns along that same thread, which arcs gently like a spider’s silk in the breeze and braids among the many threads of other bees. Back on the comb, she describes that thread to a few nearby sisters by way of a densely semantic series of gestures, by way of a map, and in time those other bees set off for the same blooms, their own gently arcing threads at once recurrent and fresh.

It is this recurrence that allows the colony to survive as a single organism, allows it to persist through time despite the fleeting lives of individual bees. At the height of summer’s arc a worker bee will live for only a few weeks, her lifespan constrained not by time, but by wingbeats. During those weeks she builds comb, nurtures the young who will replace her, and passes forward the threads she has found and followed. Thus her short life overlaps and braids with many others to form something permanent, to form something resembling the serpent latched fast to its own tail. The organism describes an eternal circle, a circle in which each life recurs as it was once lived, and in its rotation we glimpse the dizzying prospect, as Kundera writes, “that the recurrence itself recurs ad infinitum!”

If lightness is the quality of temporality, pliancy, connection, the weaving of ephemeral threads through the air, and weight the quality of persistence, permanence, endless recurrence, then perhaps honeybee inhabits the precise midpoint between lightness and weight. Hers is not the lightness of a feather, nor the weight of lead, but instead she shows us that, as Italo Calvino writes, “there is such a thing as a lightness of thoughtfulness, just as we all know that there is a lightness of frivolity. In fact, thoughtful lightness can make frivolity seem dull and heavy.”

And thus it is in the sound of a honeybee colony deep in its quiet, laminar work that we hear the enigmatic hum of the great goddess, at once an admonition and an invitation to us humans. In that hum a dense semantics, a map toward a reunion of lightness and weight. Shall we follow?

And there is is. Many thanks for your company. August is nearly upon us, which here at our house means endless fresh peppers and summer squash, so many luminous blooms, and as many swims as possible. Consider yourself invited to join me for the fourth annual Swim-a-day celebration, which lasts all through August. Until next month, happy humming-along.