The writer has disappeared, but each flourish — evidence
of a different miracle — remains, an immortal signature. — Roger Caillois, The Writing of Stones

Hello you fellow mystics on foot. I write to you from beneath the paper-gold canopy of a peninsula in the throes of autumn. Cold rain coaxes leaves to let loose their summer-long grasp and wheel down to join the fresh, crunchy stratum atop the soil. The smell is a sweet acrid portent.

Good to walk with you again.

A few days ago I walked out along the remains of a largely forgotten road up to a high place on the great turtle-back of a moraine over the lake. It’s where the wind makes first land here, where, as I’ve written before, the wind is near-perpetual, and where I go when I want to listen. The afternoon was relatively calm, warmth coming down through the clear sky to the earth and lifting off just as fast. I walked out to a familiar little gathering of jack pines and sat down to listen to the breeze through the needles. During these days approaching Samhain, as the autumn flux wends on and the sun drops, the land holds less tightly onto warmth, gives it up more quickly. It’s a thinning time, this stretch. Evening compresses against afternoon, warmth rises fast off the stones, cool air settles into the low spots. The wind sings a subtly different song through the needles right now, and I had come to listen.

As it happens, the best place to listen to the wind is just out of the wind. I lay down among the trees on the wiry knapweed and pillowy fescue, and from that shelter could hear with the highest fidelity the sound of the air passing through the branches. A thin whish. A thinness that belies the depth of the source, like listening to the distant passage of water from the brink of a narrow crevasse. Jack pine needles divide the wind for a moment into ten thousand streams, the sound of which is fine and humbling, and in it we may fleetingly hear any one of the ten thousand things. Other trees offer a different aural view into the crevasse. I wonder how they sound where you go to listen.

Through the gentle washes of wind, raven calls arrived occasionally from opposing quarters. Cool hollow-rib croak back and forth. Then a moment of stillness. From my bed amid the trees I could hear the generous, endless ecumenical silence of the stones. 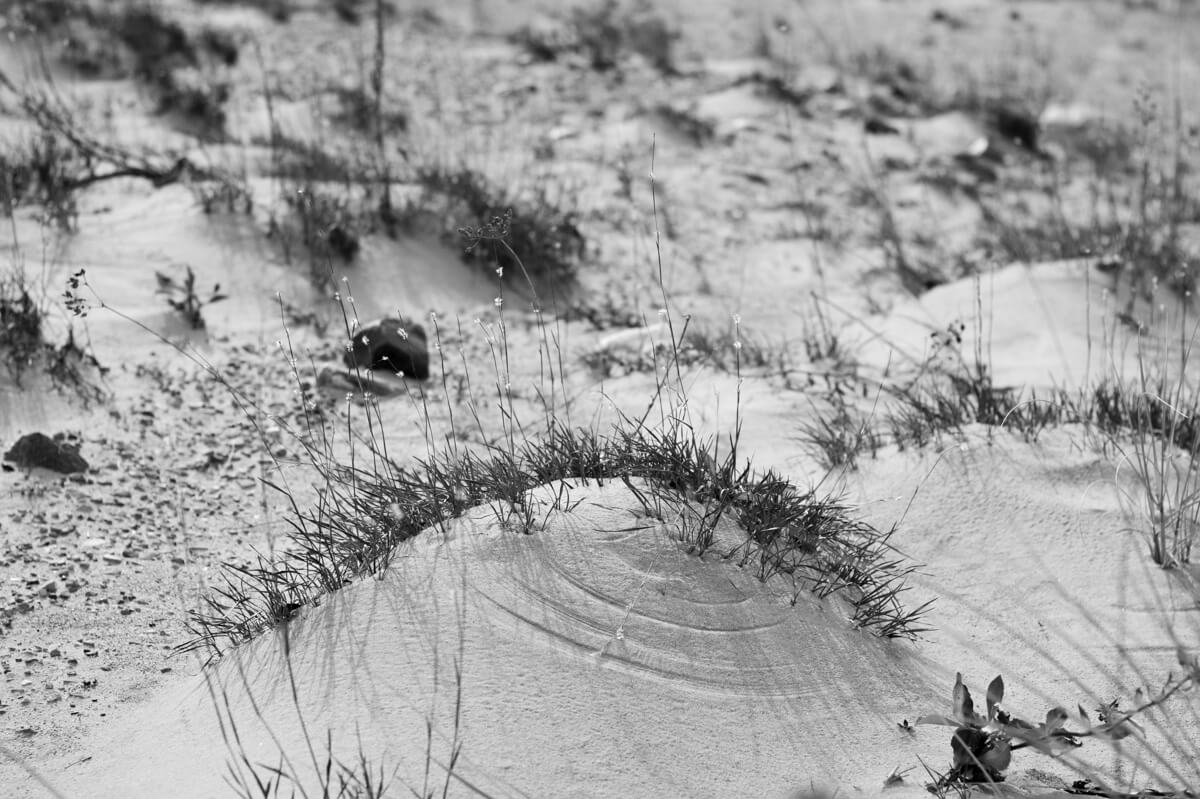 Spirit, as I understand it, is the capacity for gesture. Spirit is matter’s capacity for gesture. We could say that matter has spirit in the same sense that basalt has black. (Such and suchness, so to speak, are braided rather tightly with one another, and with perception too.) Gesture invokes spirit, which otherwise during moments of stillness settles into the low spots. Up on the moraine, for instance, where wind makes first land, and where the wind rarely lets anything at all settle, spirit is invoked in a dizzying iridescence of fleeting gestures, in boggling cosmic variety, set against the glacial drift.

A few drift gestures to consider:
Windblown sand over till, spectral; marram blades around the base, circling; deer down steep slope, keen; wind through jack pine needles, song.

If spirit is the capacity for gesture, then we can see spirit invoked everywhere in countless spontaneous and pliant gestures, all in communication with the moment. Wind in communication with sand and grass and pine, deer with steepness. Each a spontaneous, pliant gesture. A question rises quickly in the human mind: what then do these gestures mean? If, on one hand, meaning is understood as narrative, and narrative as an imposed form, then they mean precisely nothing. Gestures are supple and light (being as they are the suchness of a moment), and they shed weight like a bough under snow. Conversely, narrative is a thick slab of snowpack gathering speed. That is to say the meaning in narrative is imposed meaning, which is often just fine when we apply it to a narrow human realm, but applied to the more-than-human realm, well, there we get into trouble. It’s what poet Tim Lilburn cautions as the ‘quick move from beauty to epiphany’, which in its haste only truncates the suchness of a moment. The bough is bent to breaking.

But happily that is not the only possibility. If instead we understand meaning as illumination, then a simple gesture means a great deal indeed. Windblown sand illuminates the shape of the ground over which it flows, marram blades illuminate the wind’s recent activities, the deer illuminates consciousness at the midpoint between body and topography, and the branches illuminate the dispassionate generative music in the wind. Each is a line of melody in a spectral, circling, keen song; a parting and joining of the ten thousand streams. To say that this is what each of these gestures means is in a sense perfectly backward (the relationship between gesture and meaning is conditional rather than causal), but still, as we watch the endless protean braid pass by amidst the boggling cosmic variety, these threads are nonetheless captivating. What catches the eye is the glimmer, the possibility, of a thin spot in time or space.

In his foreword to Richard Wilhelm’s translation of the I Ching, Jung characterizes the hexagram as ‘the exponent of the moment’ in which it is cast. The yarrow stalks are counted off, indicating the hexagram from the ground up, and the hexagram then rises as an illumination of the moment; it is coincident with that moment in time, yes, but also in quality (being as it is the suchness of the moment). We can say the same of the spontaneous and pliant gestures that catch our eye amid the dizzying iridescence; each gesture also rises as an illumination, as ‘an indicator of the essential situation prevailing in the moment of its origin.’ In gestures the oracle speaks.

When I rose from amid the trees, I noticed that a flock of snow buntings had gathered in a low spot on the till a few paces away. Their nonbreeding plumage blends with the moraine’s own plumage in autumn, and as winter arrives the two plumages will come almost perfectly into phase. I took a slow step forward in greeting and the flock lifted from the moraine and tumbled off in a broad arc around the pines. The birds looked remarkably like leaves caught in an eddy of the wind.

Whish. Here we are halfway between the equinox and the solstice. How do you feel moving toward winter? As I write these last few lines, something resembling snow is falling from a gypsum sky onto the luminous copper blanket of fallen leaves. No matter how lovely, it’s chilly out there. It seems important (wise even) to gather this time of year, to share words, to make warmth. If you have any words you’d like to share, you know where to find me. I’ll put a pot on for tea.